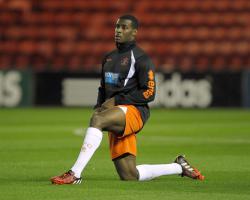 Blackpool 1-1 Bolton: Match Report - view commentary, squad, and statistics of the game as it happened.Late show rescues Bolton a pointLee Chung-yong denied rock-bottom Blackpool only their second win of the Championship season with a late equaliser for Bolton who drew 1-1 at Bloomfield Road.Blackpool, whose only league victory this term remains the 1-0 triumph against Cardiff on October 3, took the lead on 75 minutes through on-loan striker Jacob Murphy.But South Korean international Lee fired home eight minutes from time to keep the Trotters just above the relegation zone.The first chance fell to Blackpool after 11 minutes as Chris Eagles, making his debut against his former side, jinked through the Bolton defence but hit his shot straight at Andy Lonergan from 16 yards.Blackpool keeper Joe Lewis was forced into the first save of the match in the 14th minute as he beat away a fierce strike from Tim Ream from the left edge of the area.Blackpool then struck the woodwork on 18 minutes after Jacob Mellis' shot from 25 yards was deflected over Lonergan and bounced back off the crossbar.It was Bolton's turn to hit the woodwork after 25 minutes as Lee saw his low shot from 18 yards bounce off the post

Liam Feeney fired wide from the edge of the box on the rebound.Lewis again prevented Bolton taking the lead after 32 minutes when Max Clayton cut in from the left and fired a rasping drive from 20 yards, but the keeper pushed it away.Blackpool spurned a great chance to take the lead moments later as Donervon Daniels lashed wide from eight yards, and Nile Ranger should have put the home side ahead on the stroke of half-time but he headed Murphy's corner over from six yards.Bolton squandered a great chance to go in front in the 53rd minute as Neil Danns chipped the ball in for Craig Davies, who glanced his header wide from six yards.Neil Lennon's side almost made a calamitous defensive error on 57 minutes, as Josh Vela overhit a backpass to Lonergan who had to react quickly to prevent an own goal.Blackpool again threatened to take the lead in the 65th minute as Ranger's breakaway resulted in Jamie O'Hara seeing his 25-yard shot comfortably saved by Lonergan.The Seasiders came close again as Murphy flashed a fierce right-footed shot from 20 yards just wide of the post but their pressure finally paid off.Murphy was brought down on the edge of the area and the Norwich loanee proceeded to curl a superb right-footed free-kick past Lonergan to give his side the lead.But the hosts' joy was short-lived as Bolton equalised against the run of play after 82 minutes.The ball broke to Lee on the right edge of the area and the winger fired low past Lewis into the bottom corner to salvage a point for Wanderers