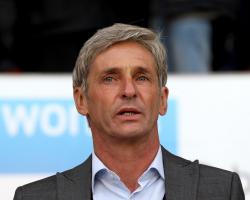 Blackpool 1-0 Cardiff: Match Report - view commentary, squad, and statistics of the game as it happened.Blackpool claim first winBlackpool finally ended their six-month wait for a victory as Francois Zoko's second-half winner moved the Seasiders off the foot of the table and gave boss Jose Riga his first victory.Zoko struck just after the hour mark to seal three points for the Seasiders for the first time since last April, 160 days ago, as they defeated managerless Cardiff 1-0 in the Sky Bet Championship.The Bluebirds now head into the international break in managerial limbo, with prospective boss Russell Slade present at Bloomfield Road but unable to take charge until a compensation agreement is reached with his former club Leyton Orient.It was the first league defeat for joint caretakers Daniel Gabbidon and Scott Young, who had hoped to sign off with an unbeaten record.However, in what is likely to be their last match at the helm, they became the first side to be defeated by Blackpool this season on a night when their fans held several demonstrations against the club's owners.The Seasiders fans, who forced several stoppages to a home game against Burnley in April by invading the pitch and throwing tangerines on to the turf, had earmarked this televised fixture as one to publicly protest against the club's owners, the Oyston family.Several banners were unfurled prior to kick-off and the relentless chanting early on focused on the fanbase's fury at the handling of the club ever since they dropped out of the top flight in 2011.Riga had insisted he had to remain focused on events between the white lines - for fear of "no sleep" otherwise - and his team showed lots of attacking intent early on, with Tony McMahon's cross-cum-shot narrowly flying off target and the lively Ishmael Miller going close on two separate occasions.Cardiff's defending was desperate at times and only Fabio's last-ditch challenge in the area prevented Nathan Delfouneso from pulling the trigger.Riga's men regained the upper hand after the interval, yet attention soon turned to the stands again as fans poured down to the advertising hoardings - and some on to the pitch - after 53 minutes in their latest show of dissent.That specifically-timed protest, a nod to the FA Cup's Matthews Final in 1953, did curb Blackpool's stranglehold on proceedings.Fabio linked well with Ravel Morrison, who was starting for the first time in a Bluebirds shirt, before prodding wide and John Brayford's deflected effort only just missed the target.However, just as the South Wales side began to turn the screw, the Tangerines claimed a 64th-minute lead on the counter.David Perkins fed substitute Joel Dielna down the left, and he in turn found Zoko, who shuffled the ball on to his left foot before firing his first Blackpool goal under David Marshall.Cardiff's managerial duo turned to Adam Le Fondre and Federico Macheda off the bench and the latter should really have equalised but he produced a tame side-footed effort shortly after Zoko's strike.Blackpool continued to throw bodies in the way, though, and could have doubled their advantage in the 89th minute when Miller lead a breakaway attack

He squared for Delfouneso, who was somehow denied by Marshall from point-blank range.Yet the visitors failed to capitalise, Le Fondre blazing over in stoppage-time as Blackpool ended their long, long wait for a victory