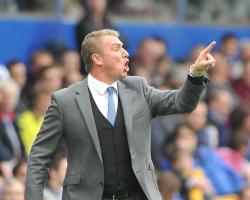 Blackpool 0-2 Ipswich: Match Report - view commentary, squad, and statistics of the game as it happened.Clark starts with defeatLee Clark's reign as Blackpool boss began with a 2-0 defeat as goals in either half from David McGoldrick and Daryl Murphy handed Ipswich victory at Bloomfield Road.The struggling Seasiders sacked Jose Riga on Monday having won just one out of 15 games in all competitions this term, with 11 defeats coming in that spell.And former Birmingham manager Clark - appointed on Thursday - failed to inspire an upturn in fortunes for the Championship's bottom side, who fell behind on 26 minutes.McGoldrick opened the scoring with his fifth league goal of the season and Murphy added the second on the hour mark for the Tractor Boys, who registered their first win since September 27.The visitors twice came within inches of taking an early lead in the eighth minute as Stephen Hunt rattled the bar with a left-footed free-kick from the edge of the area, before the ball rebounded to Teddy Bishop who struck narrowly wide from 20 yards.Straight down the other end, Nile Ranger forced Bartosz Bialkowski to push his right-footed strike - which deflected off Hunt - round the post.The home side spurned a golden chance to take the lead in the 15th minute as Ranger mis-kicked from six yards having been superbly found by Ishmael Miller's left-wing cross.And Ipswich made them pay as Bishop's mis-hit shot fell to McGoldrick, who tucked home from inside the six-yard box.Blackpool struggled to make any impression on the Ipswich goal as the half wore on, with the referee's whistle frequently breaking up the play in a first half littered with fouls.Clark's men launched a number of attacks in first-half stoppage time, but on each occasion they were frustrated by a lack of quality in the final third as Ipswich took a slender lead into the break.The hosts started the second half brighter but Ipswich threatened to double their advantage after 53 minutes

The ball fell to McGoldrick after a goalmouth scramble but Jeffrey Rentmeister blocked his effort from six yards.Ranger had Blackpool's first clear-cut chance of the second period but he headed wide from eight yards from a right-wing cross after 55 minutes.Hunt almost put the game beyond Blackpool in the 59th minute, but he could only hit the side netting with his left-footed effort from close range after McGoldrick's blocked strike fell kindly to the Republic of Ireland international.Ipswich did double their lead on 60 minutes, though, as Luke Hyam's cut-back from the by-line found top scorer Murphy who struck home left-footed from six yards for his eighth of the season.Mick McCarthy's side threatened again after 77 minutes from Paul Anderson's right-wing corner, which narrowly evaded the onrushing Smith on the six yard box, but the Tractors Boys saw out the game and got back to winning ways