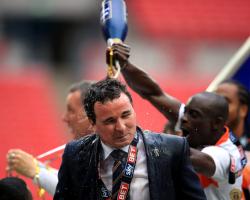 Those demonstrations, towards the Oyston family who own the club, reached new levels on Sunday as tens of thousands stayed away from the League Two play-off final.

But all the turmoil was put to one side as Cullen's goal secured a 2-1 win over Exeter and promotion back to League One at the first attempt.

"To get the winner at Wembley, it doesn't get any better than that," said the striker.

"As a kid you dream of playing at Wembley so to score the winner that sends this team up the leagues is unbelievable.

"The manager has been brilliant

He came in and steadied the ship and instilled belief in us that we could get promotion from day one.

"The lads did brilliantly and we fully deserved the win."

Those 5,000 or so fans who did attend saw Blackpool get off to a dream start with two minutes on the clock, Cullen feeding Brad Potts to drive home from the edge of the area.

Exeter equalised with an exquisite goal from David Wheeler, who took one sublime touch to control a 60-yard pass before hooking the ball over Sam Slocombe.

But the winner arrived in the 64th minute when Potts raced on to a cute back-header from Kyle Vassell and Cullen slid in to guide his cross-shot over the line.

Wheeler said: "We are very disappointed, we genuinely believed we were going to win and that we had done enough over the season.

"But we just didn't have that cutting edge in the second half, we weren't potent enough.

"It was a great feeling at the time to score, and I will never forget that

But obviously one team has to lose and I wouldn't begrudge Blackpool their win."