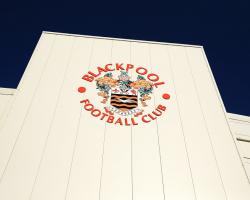 Three minutes into the second half hundreds of disgruntled Seasiders fans poured on to the turf at Bloomfield Road, forcing referee Mick Russell to take players from the two sets of sides off.

A flare was set off while fans also held up banners against Oyston, who watched on from his seat in the West Stand, for his already-relegated side's final game of the season.

After 20 minutes, those demonstrators were still present, raising the possibility that the match may have to be abandoned.

Saturday had been dubbed 'Judgement Day' by disgruntled Seasiders fans in response to Oyston's August declaration that naysayers should "judge us at the end of the season".

A pre-match march was also organised by Blackpool Supporters' Trust and the Tangerine Knights.