No replay for abandoned game 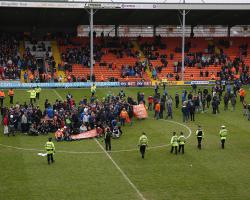 The Seasiders' final fixture of the season was halted 48 minutes in when supporters poured on to the pitch in protest at the Tangerines' chairman Karl Oyston and, after staging a sit-in demonstration in the centre circle for over an hour, referee Mick Russell eventually called the fixture off.

In a statement issued on Monday evening, the Football League said: "The Football League can confirm that Blackpool and Huddersfield Town will not be required to finish or replay their Sky Bet Championship fixture that was abandoned after 48 minutes on Saturday.

"Having considered all of the relevant matters, it was felt that that asking the two clubs to play the match again would serve no justifiable purpose given the nature of Saturday's events and seeing as its result has no bearing on promotion or relegation issues.

"The board of the Football League will consider the result of the match, and any other matters relating to it that are within its remit, at its next meeting on May 14

In doing so, it will take into the account the observations of both clubs.

"Any matters relating to crowd behaviour will be considered by the Football Association."