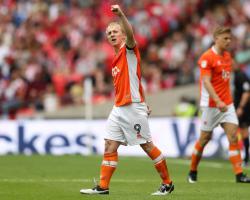 The troubled Seasiders have played all season to a backdrop of supporter boycotts and protests against the club's owners.

They only secured their place in the League Two play-offs by winning the final-day scramble for seventh place, and then needed a stoppage-time own-goal to beat Luton 6-5 on aggregate in the semi-finals

Most of their disgruntled fans, who want rid of owners the Oyston family, stayed away from the national stadium - Blackpool sold around 5,000 tickets compared to the 37,000 who saw them secure promotion to the Premier League only seven years ago

Yet the 5,000 were celebrating as goals from Potts and Cullen sealed their return to League One after just one season in the basement division

It was tough on Exeter, who battled hard and had a memorable Wembley goal, scored by David Wheeler, to show for their efforts

A half-empty Wembley provided a surreal atmosphere, but one Blackpool's players are used to with thousands of fans having refused to attend their home games all season

Cullen held up a long ball from the back before laying it off to the onrushing Potts, who drove first time past Grecians goalkeeper Christy Pym from the edge of the area

Exeter almost hit back in 10th minute when Wheeler teed up Ollie Watkins 10 yards out but the striker, the EFL young player of the year, was denied by a superb save from Sam Slocombe.

Blackpool, already without injured captain Andy Taylor, lost their stand-in skipper Tom Aldred when he limped off after half an hour.

And five minutes before half-time Exeter hauled themselves level with an exquisite goal from Wheeler, who took one sublime touch to control a 60-yard pass from Craig Woodman before hooking the ball over Slocombe and into the net

Potts prodded the ball goalwards and, although Pym got a touch, it fell perfectly for Cullen to slide in and guide over the line.

Exeter attempted to hit back again but substitute Reuben Reid fired wide and Watkins headed over in stoppage time as Blackpool held out for victory.