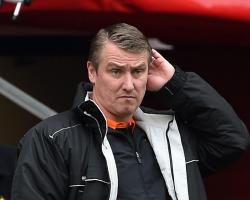 Blackpool's season ended in farcical circumstances as their final match of the season, at home to Huddersfield, was abandoned after 48 minutes following a fan protest against club chairman Karl Oyston.

In a statement issued via the club on Saturday, Clark said: "After a great deal of thought I have come to the decision that it is not in the best interests of either myself or Blackpool FC that I continue as manager of the Football Club and have therefore tendered my resignation to the Chairman, which he has accepted

"It only remains to thank my staff, the players, the supporters and everybody else involved with the club for their help and support and wish them the best of luck for the future."