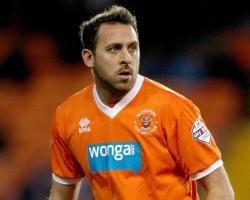 The 30-year-old former Newcastle player used the social network site to reveal his anger following a training session taken by a fitness coach, prompting the Seasiders to take immediate action.

It read: "In light of a tweet from striker Michael Chopra, Blackpool football club can confirm that the player will receive a maximum fine and has been warned about his future conduct.

"The club can confirm that Chopra was one of a number of players asked to report to training as normal this morning (Tuesday) for extra work with the fitness coach.

"Both the manager and the chairman are aware and disappointed with the contents of his tweet, prompting this course of action.

"The player, who has the right to appeal, has since apologised for the tweet and removed the contents from his account.

"The manager has requested that the fine levied against Chopra, which equates to more than Â£10,000, be donated to the club's Community Trust, to assist in their work as part of Altogether Now - A Legacy for Blackpool.

"The money will be utilised across a number of projects to improve the lives of young people in Blackpool, through the delivery of health, education and inclusion schemes."

Chopra signed for the Seasiders during the summer transfer window and has since failed to find the net in 17 appearances.