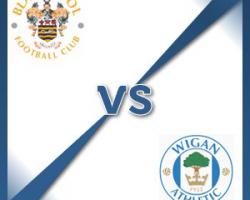 Blackpool V Wigan - view commentary, squad, and statistics of the game live.Seasiders wait on O'HaraBlackpool are hopeful experienced midfielder Jamie O'Hara can make the bottom-of-the-table battle with Wigan.The Seasiders will move level on points with the Latics with victory but O'Hara (rib) is a doubt having been withdrawn at half-time during the 4-0 defeat to Brentford.Charles Dunne was dismissed in that game and now begins a three-match suspension, but fellow full-back Niall Maher (groin) could return at the end of a week when he extended his loan stay from Bolton.Darren O'Dea (ankle) was an unused substitute last time so is another option to Blackpool boss Lee Clarke, who will be without the likes of Andrea Orlandi (thigh) and Mark Waddington (foot)

Wigan are still missing Leon Clarke and William Kvist.The news on on-loan striker Clarke (shoulder) is better than first hoped, and he is expected to return to the Sky Bet Championship club at some point after initial fears his season could be ended by the problem he sustained against Charlton.Denmark international Kvist (hamstring) picked up an injury in the same game and so Latics boss Malky Mackay could stick with the pairing of James Perch and Kim Bo-Kyung which he used against Cardiff in midweek.Grant Holt (knee) and Emyr Huws (ankle) will not feature again this term, but Emmerson Boyce, who made his first start since December on Tuesday, looks set to retain his spot