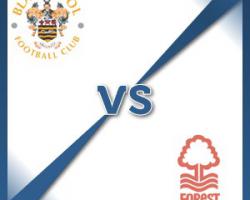 Blackpool V Nottm Forest - view commentary, squad, and statistics of the game live.Dunne set for Seasiders squadCharles Dunne should be fit for Blackpool when they host Nottingham Forest.The defender was forced off early in the second half of the defeat to Middlesbrough on Tuesday night, yet boss Lee Clark is hoping he can shake off the knock in time to make his fourth successive start.Striker Saer Sene has an outside shot of being in the squad too having returned to training following a bout of illness.That leaves just Grant Hall (ankle) on the sidelines and the defender has been pencilled in for a return next Saturday when the struggling Seasiders travel to Blackburn.Dougie Freedman will look to maintain his 100 per cent start as Nottingham Forest manager but he will have to do so without leading scorer Britt Assombalonga.Assombalonga was carried from the pitch on a stretcher during the midweek win over Wigan

The 15-goal striker is set to undergo a scan to determine the extent of the damage and it is not yet known how long he will be out, although he will miss the trip to Bloomfield Road.Matty Fryatt and Dexter Blackstock will compete to replace Forest's record signing in the starting line-up but that could be the only change made by Freedman, who has named the same starting XI in both of his games so far.Midfielders Chris Cohen (knee) and Andy Reid (groin) remain unavailable but it is hoped the latter will return before the end of the season