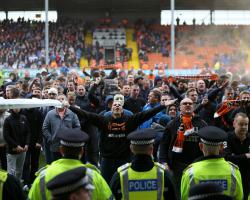 Referee Mick Russell was forced to take the players off the pitch with the score at 0-0 and, after the game was held up for more than an hour, the decision was taken to call it off

The Seasiders have been charged with failing to ensure their supporters did not encroach on to the playing area and have until May 28 to respond.

An FA statement read: " Blackpool have been charged by The FA in relation to crowd incidents during the second half of their match against Huddersfield Town at Bloomfield Road on 2 May 2015

"It is alleged the club failed to ensure that no spectators or unauthorised persons were permitted to encroach onto the pitch area whilst attending this fixture, resulting in its abandonment.

Blackpool are also facing a Football League charge for failing to fulfil the fixture and that case will be subject to a football disciplinary commission.

The Football League have already ruled on the outcome of the game as they announced the result will stand as 0-0 last week, meaning the relegated Seasiders finished the 2014/15 campaign with a meagre 26 points.